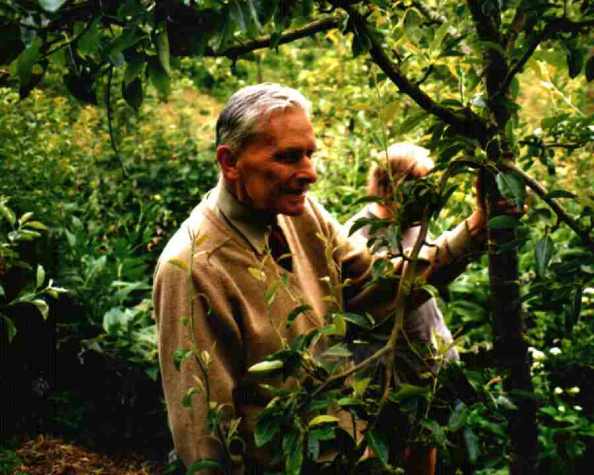 March 7 2015 marks 15 years since the death of Robert Hart, probably the foremost pioneer of Forest Gardening in the cool temperate UK. To me Robert was a true 20th Century hero, whose contribution to our sense of possibility far, far outstripped the sad, small values my generation have been encouraged to see as aspirational. I’m proud to have met him, and  hope that I can do the best I can to carry forward the vision that he had of productive city forests and edible landscapes replacing the grey concrete jungles and factory farmed ‘countrysides’ in which so many of us exist. Inspired by the example of Robert, and more recently the work of Martin Crawford of the Agroforestry Research Trust and others who have learned lessons from both Robert’s successes as well as those things that did not work so well, forest gardening has now become an international movement. Literally thousands have been created in community spaces, private gardens and school grounds both in the UK and around the world.

This is an article I wrote following a visit to Robert’s forest garden at Wenlock Edge in 1997, three years before his death in 2000, together with some photos from the visit. It was originally published in issue 2 of Growing Green International, the magazine of the Vegan Organic Network.

Following the Permaculture Design Course run by ‘Naturewise’ in the Spring 1997, a group of graduates decided to visit what has been described as possibly the only fully developed working Permaculture site in the UK, Robert Hart’s Forest Garden. Situated at Wenlock Edge on the Welsh borders, Robert began the project over thirty years ago with the intention of providing a healthy and therapuetic environment for himself and his brother Lacon, born with severe learning disabilities. Starting as relatively conventional smallholders, Robert soon discovered that maintaining large annual vegetable beds, rearing livestock and taking care of an orchard were tasks beyond their strength. However, he also observed that a small bed of perennial vegetables and herbs they had planted up was looking after itself with little or no intervention. Furthermore, these plants provided interesting and unusual additions to the diet, as well as seeming to promote health and vigour in both body and mind.

Noting the maxim of Hippocrates to “make food your medicine and medicine your food”, Robert adopted a vegan, 90% raw food diet. He also began to examine the interactions and relationships that take place between plants in natural systems, particularly in woodland, the climax eco-system of a cool temperate region such as the British Isles. This led him to evolve the concept of the ‘Forest Garden’: Based on the observation that the natural forest can be divided into distinct layers or ‘storeys’, he developed an existing small orchard of apples and pears into an edible landscape consisting of seven dimensions;

I) A ‘canopy’ layer consisting of the original mature fruit trees.
2) A ‘low-tree’ layer of smaller nut and fruit trees on dwarfing root stocks.
3) A ‘shrub layer’ of fruit bushes such as currants and berries.
4) A ‘herbaceous layer’ of perennial vegetables and herbs.
5) A ‘ground cover’ layer of edible plants that spread horizontally.
6) A ‘rhizosphere’ or ‘underground’ dimension of plants grown for their roots and tubers.
7) A vertical ‘layer’ of vines and climbers.

Stepping into the Forest Garden is like entering another world. All around is lushness and abundance, a sharp contrast to the dust bowl aridity of the surrounding prairie farmed fields and farmlands. At first the sheer profusion of growth is bewildering, like entering a wild wood. We’re not used to productive landscapes appearing so disorderly. But it doesn’t take long for the true harmony of nature’s systems to reveal themselves, and the realisation sinks in that in fact it is the Agribiz monocultures, with their heavy machinery, genetic manipulation, erosion, high water inputs, pesticides and fertilisers which are in a total state of maintained chaos. Whereas hectares of land may produce bushel after bushel of but one crop, genetically degraded and totally vulnerable to ever more virulent strains of pest and disease without the dubious protection of massive chemical inputs, just an eighth of an acre of a garden such as Robert’s can output a tremendous variety of yields. Whilst too early in the year for the apples, plums and pears beginning to swell in the trees, we were surrounded by gluts of black, red and whitecurrants, gooseberries, raspberries and loganberries; as well as a profusion of saladings such as sorrel, lovage, tree-onions, wild garlic, borage, lemon balm and many other herbs.

Foraging a meal for the nine of us was an extremely enjoyable task, not like work at all. Robert, a gentle and erudite man, yet possessed of a great clarity of purpose, joined us for our campfire feast. As we sat and chatted into the evening he explained his motivations and hopes for the future. Of his plans to expand the original Forest Garden, and his dream of a network of such gardens covering not only Britain but the world, bringing an abundance of natural food, and healing to both peoplekind and the planet. He spoke of his philosophical inspiration by figures as diverse as John Seymour, Ghandi, Kropotkin and Kagawa; of the antecedents of the Forest Garden such as the ‘home gardens’ of Kerala, where most of the land is covered with productive trees; and later sang us songs that he used to share with his late brother Lacon, including those of murdered Chilean land and human rights campaigner Victor Jara.

This was a magical evening, an illustration that perhaps the primary forces within the Forest Garden are of spirituality and peace. Whilst being highly productive of nuts, fruits, fresh perennial vegetables and medicinal herbs, the most important yield of this place is the reminder that there is much more to how we find sustenance as human beings than what we consume, than looking at our sources of nourishment purely in terms of net tonnes per hectare. The forest garden is an idea whose time has come.

”Obviously, few of us are in a position to restore the forests.. But tens of millions of us have gardens, or access to open spaces such as industrial wastelands, where trees can be planted. and if full advantage can be taken of the potentialities that are available even in heavily built up areas, new ‘city forests’ can arise…” (Robert A.de J.Hart, 1 April 1913 – 7 March 2000)

Graham Burnett is the author of The Vegan Book of Permaculture. Inspired by Robert Hart, Graham has helped to create a number of forest gardens, and maintains his own forest garden on an allotment near his home in Essex. He also runs regular forest gardening courses. Check out his new Forest Gardening Beginner’s guide here.

Buy Forest Gardening a Beginners Guide here for just £5.00 and get a FREE What Is Permaculture posterzine featuring artwork by Graham Burnett!

Download a free sample from The Vegan Book of Permaculture or buy your SIGNED copy here at the special price of £13.99 and get a FREE What Is Permaculture posterzine and greetings card  featuring artwork by Graham Burnett!

Buy a SIGNED copy of Permaculture a Beginner’s Guide here at the special price of £7.99 and get a FREE exclusive What Is Permaculture posterzine and greetings card featuring artwork by Graham Burnett!

Buy The Vegan Book of Permaculture, Permaculture A Beginners Guide, an exclusive Salvage™ Spiralseed T-shirt plus extra booklets and special What Is Permaculture posterzine for the special price of £39.95! 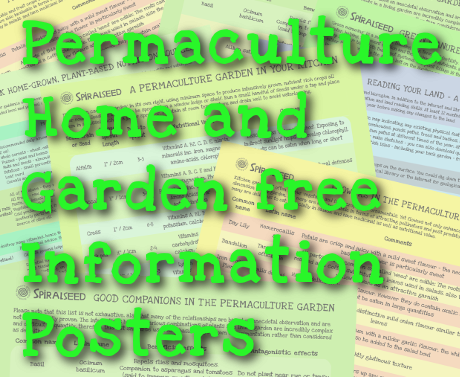 Sign up to our newsletter to receive your free Permaculture Home and Garden Information Posters, plus all the latest permaculture news, recipes, courses and offers from Spiralseed…

Spiralseed’s courses are certified by the Permaculture Association (Britain)

Crowdfund your Spiralseed course with We The Trees!

Sign up to our newsletter to receive your free Permaculture Home and Garden Information Posters, plus all the latest permaculture news, recipes, courses and offers from Spiralseed…